The official Dances of Vice website is now online! Dances of Vice is a newmonthly 1920s/30s dance/cabaret night held in the spirit of the early 20th century days of forgotten elegance, decadence, creativity, and vice. Please visit http://www.dancesofvice.com for information regarding future Dances of Vice events, pictures and playlists from previous events, artist biographies, and more.

Our next evening affair falls on September 15th, and we will be featuring sensational pianist/chanteuse Jill Tracy on stage, who promises to enchant audiences with her signature concoction of dark parlour & classical piano, haunting lyrics and seductive style. Nouveau Noir Dancer Tempest will also weave her magic on stage with her unique belly dance performance influenced by early 20th century aestheticism & such artists as Theda Bara & Ruth St. Denis. In addition, distinguished photographer Don Spiro will be showcasing his work as part of our “Villains and Visionaries” theme, with a series of Weimarian images depicting the destructive passions of lusty vamps devoted to the intricate drug culture of a lost world.

It occurred to me that some people here might be interested in this community. It's also quite possible that your input would be of benefit to it!

See what you think. What the hey.

A year later, a different artist. Obviously Earle Bergey had actually seen an automatic pistol being fired. (By October of 1942, a great many more Americans had, than had in January of 1941!)

There's still something disturbing about using a girl as a filament in a lightbulb. That would hurt! - and I wonder if that strategically-placed 'thumper' from Dune floating sideways in the air was added at editorial insistence. She is wearing a skirt...

There seems to be a tradition in pulp SF illustration - a tradition extending all the way up to the promo photos for 1977's Star Wars - that the hero holding the gun must be shown as firing it - usually at nothing, and depicted always in the most ignorant, lackluster way.

'Sparky' here just set off a small, controlled explosion in his hand, firing a projectile against a glass object, shattering it. The action depicted here is going to be a lot more violent than a feeble straight-edge line of yellow going to some broken pottery, while the languorously stretching girl looks on with placid expression. - You'd think she'd flinch, at least; a gunshot at close quarters can do permanent hearing damage.)

The “Captain Future” comics ran to the same formula - always, always he is "firing" his proton pistol at the bad guy, without anyone, including the bad guy, even noticing - and neither is he ever shown actually hitting his target, which is unfortunate, for the raygun's "beam" was a close-set series of expanding smoke rings with an effective range of about five feet, and I'd like to know what harm that was intended to do!

Hello,
We are silent ghost cinema, we recently finished our new film. It's our first new short in a long while... The Cabinet of Madame Blavatsky please feel free to swing by the Blavatsky Cabinet page and check out a excerpt from the film. Music by the wonderful Paul Mercer.
http://www.myspace.com/blavatskyscabinet
Thanks

Why can't I buy something like this mass produced?

I want to connect to the Memex with an Attwater-Kent Orthophonic AE.

Clearly something is wrong with this segment of the space time continum.


This fragrance is named Jamais avec les domestiques after an "admirable French motto" that Cora Pearl noted but eventually chose to ignore completely. It means "not with the servants", dears, but she did with the servants (only very good looking ones, naturally) several times. Shocking! The better known phrase, employed in English bourgeois homes when the conversation became intimate in nature, was "Not before [or 'in front of'] the servants". In her Memoires she writes:

Up to that time I had always embraced the admirable French motto jamais avec les domestiques; but my observation of the boy's passion for me had me roused to try him. As he gave me his hand to help me step into the bath, I told him to remove his livery, for, said I, it had cost several hundred francs, and I was not eager it should be soiled". 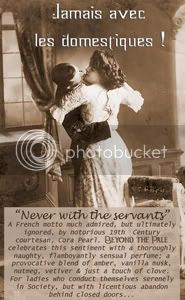 A thoroughly naughty, flamboyantly sensual perfume; a provocative blend of amber, vanilla musk, nutmeg, vetiver & just a touch of clove. For ladies who conduct themselves serenely in Society, but with licentious abandon behind closed doors...

In order to better gauge how many boxes to purchase from our supplier, we are allowing you to PRE-ORDER this perfume before its official launch. This also gives you the benefit of knowing you have snagged yourself a bottle, rather than waiting until launch day and discovering (as usual) they have all sold out within a matter of an hour or so!

Sneaky peaks on our journal tomorrow of a brand new fragrance to be launched soon... It's called Pearl's Flourish (the name is deceptively innocent, it's quite terribly shocking when I tell you what the slang means, you know!) and is made to celebrate the infamous 19th century courtesan, Cora Pearl.

If you want to read more about her, you should certainly consider purchasing the excellent book, Courtesans by Katie Hickman. A fabulously informative yet gossipy read!

Alternatively, you could seek out Cora's very own memoirs (now sadly out of print) - I am so fascinated with her that I have done just this and cannot wait to read it. Sounds as though it may be incredibly scandalous...

The first two FULL SIZE (10ml) bottles of fragrance to leap from our latest releases & on to eBay are Rake's Blend and Doxy... grab them whilst you still may, my dears. We absolutely cannot guarantee how long it will be before we sell out of these, and then we shall move on to others from our latest range. PLEASE HURRY if you want your favourite!

Click the relevant name to be whisked to the fixed-price buy it now page on eBay...

Rake's Blend: Frisky ginger warms the cockles, with vibrant Virginian cedarwood nestling against clove bud; the freshness of pure spearmint & the irresistible pull of musky vanilla. Both sexes should wear this with caution: ebullient ravishing is likely to occur...

Doxy: A darkly fruity blend of blackberry, spice & all things vice. Juicy blackberries burst with warm hints of ginger, a sprinkle of cinnamon and musky vanilla. The freshness of bergamot whispers of more innocent times, but the richly aromatic, intensely carnal note of vetiver has its wicked way at last...

I collect antique postcards,
this one is from my collection.